When I left Lithuania at the end of August 2011, the new Kaunas arena was still under construction — even though the arena was supposed to host the September European Basketball Championship.  They managed to finish the arena just in time.  It’s a big glass box on the river, but I hear that inside it is comfortable and on the leading edge of arena technology.  While the building itself isn’t particularly attractive, the glass provided amazing reflections of the clouds and sky on Sunday afternoon. 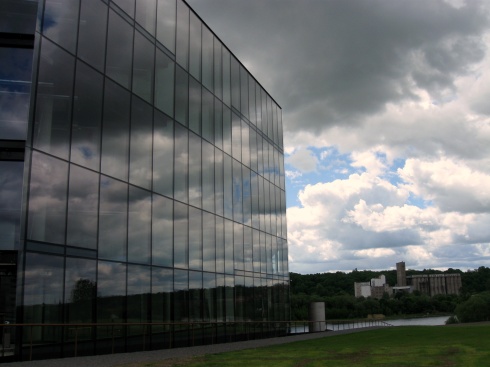 Creating academic and public environments for the humanities to flourish Researching Soviet and Eastern European history Engaging people and ideas as a writer and interviewer Traveling as much as possible END_OF_DOCUMENT_TOKEN_TO_BE_REPLACED
This entry was posted on Monday, May 14th, 2012 at 9:27 am and posted in Life in Kaunas. You can follow any responses to this entry through the RSS 2.0 feed.
« Fluxus Ministerija | Kaunas
Commemorating Kalanta at a Secondary School »