As I was walking down the stairs in the National Gallery on my way out of the photography exhibit, a painting in the Early 20th Century room caught my eye.  I immediately loved the bright colors and the style of the painting — and I was even more taken with it once I saw the title “Daukanto street in Kaunas.”  I frequently walk along that very street, although it has changed a lot since the painting was made in the 1920s.  The painter Mstislav Dobuzhinsky was a Russian, born in Novgorod in 1875, who became a Lithuanian citizen after World War I and then later emigrated to the United States.  He lived in New York until his death in 1957.  He was particularly known for his cityscapes, as well as his illustrations and set designs.  I couldn’t find an image of the painting in the Lithuanian National Gallery Collection, but here are a few other paintings that I discovered online and like. 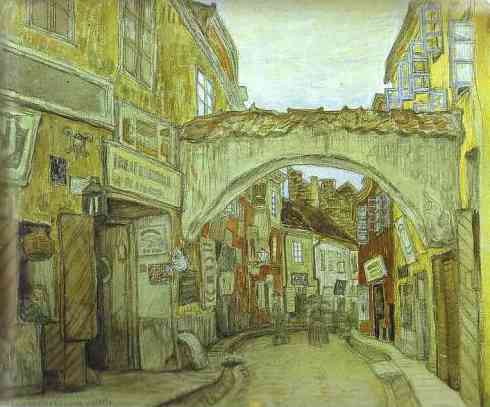 Creating academic and public environments for the humanities to flourish Researching Soviet and Eastern European history Engaging people and ideas as a writer and interviewer Traveling as much as possible END_OF_DOCUMENT_TOKEN_TO_BE_REPLACED
This entry was posted on Monday, February 21st, 2011 at 3:00 pm and posted in Life In Vilnius. You can follow any responses to this entry through the RSS 2.0 feed.
« Photographers Underground
Word Pairs »