Sticking with a Classic

As some of you may know, I love varškės surėlis su šokoladu, sweetened white cheese covered in chocolate.  I eat one almost every day when I am living in Lithuania.  They are like little cheesecake treats.  I usually eat the vanilla-flavored ones, although every once in a while I get the ones with poppy seeds.

Recently I decided that I need to expand my varškė horizons.  After all, these yummy treats come in a variety of flavors.  I bought four different types — vanilla, chocolate, truffle and cola.  The cola-flavored one was terrible.  I was surprised that I didn’t like the chocolate one.  The dark chocolate coating ws good, but the chocolate used to flavor the cheese wasn’t as tasty.  The truffle one had a chocolate truffle center inside the cheese, which was interesting and pretty good.  However, the varškė in both the chocolate and the truffle treats was more like a mousse, rather than the rich dense cheese.  Both those flavors were the grocery store brand and not the same brand that I buy in vanilla.

In the end, my favorite was still the vanilla-flavored one with the rich, dense cheese.  Last year I found a coconut-flavored one that was fantastic, but I haven’t seen it this year.  Unless I can I can find it again, I will be content to enjoy my basic vanilla-flavored varškė treat. 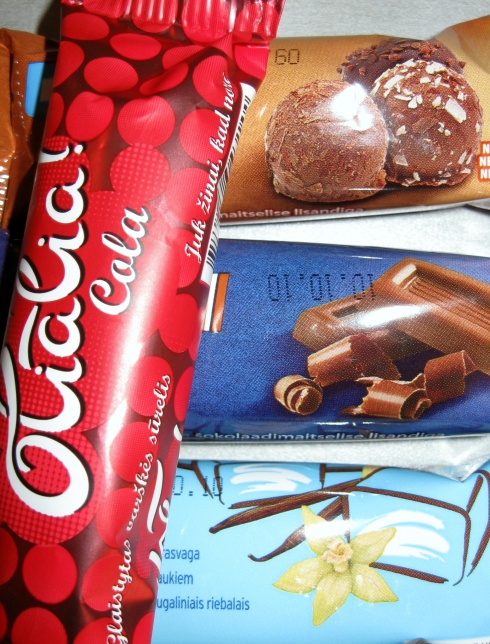 Creating academic and public environments for the humanities to flourish Researching Soviet and Eastern European history Engaging people and ideas as a writer and interviewer Traveling as much as possible END_OF_DOCUMENT_TOKEN_TO_BE_REPLACED
This entry was posted on Wednesday, October 13th, 2010 at 3:28 pm and posted in Life in Kaunas, Life In Vilnius. You can follow any responses to this entry through the RSS 2.0 feed.
« Enjoying an Autumn Day
Collecting Keys »

4 responses to “Sticking with a Classic”