A Sigh of Dismay

Capitalism has its benefits and its drawbacks.  In Venice, there is currently an example of marketing receiving priority over everything else.  The Bridge of Sighs is one of the most famous landmarks in Venice.  Built in 1602, prisoners crossed over this bridge on their way between the interrogation chambers and the Rio de Palazzo prison.  The palazzo is currently under re-construction that requires a facade in front of it.  The facade has a small cut-out so that the bridge is still visible.  While I understand the need for the facade, I think that they could have come up with something less commercial and intrusive to protect the view of the bridge.

This is how The Bridge of Sighs looks without the construction facade: 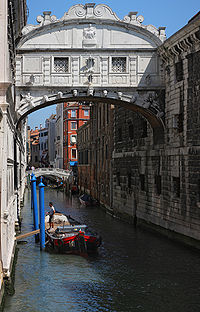 This is the view of the bridge that I had: 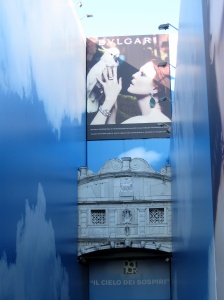 Creating academic and public environments for the humanities to flourish Researching Soviet and Eastern European history Engaging people and ideas as a writer and interviewer Traveling as much as possible END_OF_DOCUMENT_TOKEN_TO_BE_REPLACED
This entry was posted on Tuesday, October 5th, 2010 at 3:00 pm and posted in Italy. You can follow any responses to this entry through the RSS 2.0 feed.
« Life in Venice
Sunday in Vicenza »