Last Saturday, I took the train from Bologna to Venice with a Lithuanian doctoral student who was also participating in the conference.  We met up with an Italian doctoral student whom we met through the project, his wife and her cousins from New Zealand.  After waiting in line for an hour to drop off our bags at the left luggage office at the train station, we walked out into Venice in the sunshine.  Over the next five hours, I had one of the most beautiful afternoons that I have ever had.  Venice is packed with tourists and we did see the most famous sites such as San Marco Basilica and the Bridge of Sighs.  But mostly we spent our time away from the crowds, exploring the narrow streets of the city.  We walked for four hours and I don’t think that we crossed the same little bridge or walked through the same square twice.  Plus we took a gondola ride! 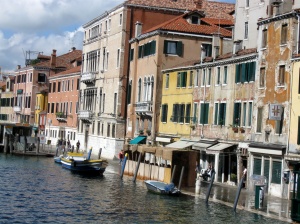 Creating academic and public environments for the humanities to flourish Researching Soviet and Eastern European history Engaging people and ideas as a writer and interviewer Traveling as much as possible END_OF_DOCUMENT_TOKEN_TO_BE_REPLACED
This entry was posted on Saturday, October 2nd, 2010 at 4:51 pm and posted in Italy. You can follow any responses to this entry through the RSS 2.0 feed.
« And Now to Get to Work
Venice Scenes »

One response to “A Beautiful Day”