The Castle on the Hill

Krakow is probably most famous for Wawel, a castle complex where the first rulers of Poland lived before the capital was moved to Warsaw.  Almost every Polish king was crowned in the Cathedral in Wawel and many are buried there, as are other more modern national heroes.

It would take a full day to tour all the exhibitions in the castle, which include the state rooms, the royal private residences and the treasury with the crown jewels.  We only had Sunday afternoon so we were forced to choose from among the many tourist offerings.  First we went through the “Lost Wawel” exhibition, which begins with a computer-generated model of the first buildings constructed on the site in the 10th century. We then got to walk through an archeological dig that uncovered fragments of the medieval wall and the small rotunda that housed the first church in Krakow.

Next we took the audio tour of the Cathedral.  The current cathedral was built in 1364.  It is huge, with 18 side chapels.  The tour included a climb up the bell tower to see the 11-ton St. Sigismund Bell and a walk through the Royal Crypts below the church.  Highlights for me — the tombs of King Jogaila (the Lithuanian Grand Duke who married Jadvyga), Adam Mickevic (famous 19th century Polish poet) and Marshall Jozef Pilsudski (one of the founders of the modern Polish state).

At the end of the tour, we unexpectedly participated in a Polish national moment.  As we exited the royal crypts, we were channeled into a stream of people who were coming through a separate entrance to walk past the tomb of the Polish president who died in the plane crash at Katyn in April.  His burial in Wawel Cathedral was controversial – many questioned whether he really qualified as a national hero – but that apparently didn’t matter to the hundreds of people who were coming to pay their respects.

Unfortunately I wasn’t allowed to take photos in the exhibit or the cathedral, but here are a couple of photos from the outside. 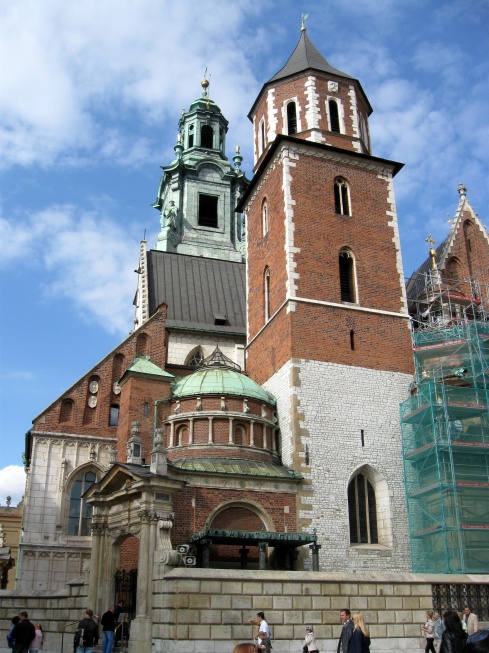 Creating academic and public environments for the humanities to flourish Researching Soviet and Eastern European history Engaging people and ideas as a writer and interviewer Traveling as much as possible END_OF_DOCUMENT_TOKEN_TO_BE_REPLACED
This entry was posted on Saturday, September 25th, 2010 at 3:30 pm and posted in Poland. You can follow any responses to this entry through the RSS 2.0 feed.
« Where else would grad students go?
Krakow Scenes »